Interview with Dan Schechter, Writer/Director of 'Life of Crime' 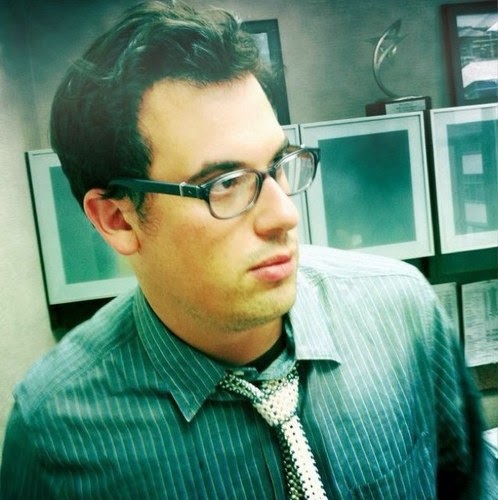 Dan Schechter is the writer/director of LIFE OF CRIME, a film starring Jennifer Aniston that's in theaters and on VOD now. On Twitter, he's @danschechter.

What's your background - how did you get started in screenwriting?

My background is horribly cliched for this line of work: A Jew from Long Island. I went to Emerson, where I studied in writing for film specifically... and then I saw people direct my writing and decided I wanted, nay needed to direct.

Did you ever have a job in the industry, like a PA or assistant?

No. I like to admit in moments like this that I came from money. I'm not RICH rich, but not needing a day job necessarily for a lot of my twenties was a massive advantage I like to acknowledge because I know most people are not so lucky. The only money I made in the "biz" in my 20s was from re-cutting people's films (like a polisher). That and cutting trailers. Both jobs were incredibly fun and introduced me to some lovely filmmakers and friends. (And of course taught me valuable lessons).

What was your first paid writing opportunity? How did that come about?

In 2005 I wrote a feature called The Big Bad Swim (a comedy about an adult swim class), that I didn't direct, but a friend did. Neither of us was paid for this, and since back in 2005 no one was really making micro-budget features (films for under 100k), we made that movie for about 400k because we had to shoot it on film. We raised the money through many friends and family members.

In 2006, I wrote a script called Goodbye Baby (about a girl who wants to be a stand up comic), which became my directorial debut. For that film, we got very lucky: a single investor put up probably more than we should've spent, almost 800k. I got paid on that, but in hindsight, it wasn't particularly deserved because I was still learning on the job and lucky to have my film financed at all really. The movie hardly made any of its money back and I still feel terrible about that.

Is there anything you've learned since you started, or something you wish you'd known or done differently?

Countless things... Even though it wasn't my first feature, I often wish Supporting Characters (a comedy I made in 2012, about two best friends) was. I think I learned on that film to be more personal, write from within. You have to sort of sweat cliches out of your pores when you start, I think. Most first films are just unconsciously copying other movies... but Supporting Characters was the first time I felt I connected with audiences because it was very truthful to who I was and what was happening to me. I think most first time feature filmmakers should follow examples like Mean Streets, Clerks, Swingers, Brothers McMullen, Tiny Furniture, etc... get your feet wet in a world you know inside and out, that you are the best possible person to tell that story.

How did you get your agent and/or manager?

A good bit of luck. My first feature that I directed, Goodbye Baby (mentioned above) got into Slamdance in 2008. I cut a small trailer for that film and a manager I won't name here saw that trailer and liked it and reached out to me.  I think he liked it because the movie looked commercial (which my sensibility mostly is.) I also later learned that being both a writer AND a director made me all the more appealing (doubling my odds, essentially). He then sent that movie to three agencies: Gersh, UTA, and Endeavor. My agent, Phil, saw the movie at Endeavor and called the manager and said, "Stop sending this movie to other agents, I want to rep him." And we just clicked... Then William Morris and Endeavor merged and I lucked into being repped by the second largest agency... Phil still reps me to this day and has been very kind to and patient with me. The manager and I have since parted ways due to what I believed was his "chronic negativity."

Is there something you still struggle with when writing scripts?

Sitting down and writing them. I FUCKING HATE WRITING. I have no discipline, and it's very hard on my ego to believe in it enough to finish. I don't mind writing this, this I'm enjoying. This is free association and I know what to say... but writing a script... creating something from nothing... nothing is harder for me than that. I've found ways to deal with this. 1) LIFE OF CRIME: Adapt a really good book you connect with that already has amazing characters, set pieces, and a story that all makes sense. 2) SUPPORTING CHARACTERS: Or write something semi-auto-biographical because basically you're just writing YOU and your friends or family and that's 1,000 times easier, to do a slice of life movie about your world. I literally sometimes wrote out conversations that happened that day... and they were pretty good.

How do you decide what to write? Is there any particular theme or topic you find yourself coming back to?

I think I'm so hard on myself and my ideas, that if something keeps nagging at me and coming back up in my mind, it must be fairly good. Right now I'm writing something for Jen Aniston. I have no idea if she'll do it, but I felt I saw how much she was capable of that I hadn't seen her do and I wanted to write a new character for her. I also wanted to say some personal things about me and my family, and so I just kept adding to that character's life, like a Christmas tree. Characteristics for her, story-lines she's dealing with, characters in her life...

It's like: you'll be listening to your iPod... all the music comes and goes and suddenly a song comes on and you KNOW it has to be in the movie. Life is like that... you'll be doing weird shit all day and then at some point you'll be golfing at Chelsea Piers (NYC reference) and say to yourself, This should be in the movie. Even if you don't know why, there's usually a good reason and I love to follow those instincts. Movies feel to me like they already exist and its our job to find them. Like the guy who asks the sculptor how do you sculpt an elephant from stone, and the sculptor responds, "you just sculpt away everything that doesn't look like an elephant."

How did your involvement with Life of Crime come about? Did you get the rights and stuff or was it an open assignment that came to you?

LOOOOONNG story short:
I took the book off my shelf in 2008.
No idea who owned it.
In 8 days, I had a draft that I wrote for fun by basically transcribing a very, very good book and making some smart editorial decisions. I bet the script was 95 pages or so.
I mailed it into Leonard's contact info from IMDB.
They liked it, didn't know who owned rights.
It took TWO YEARS to track down the rights. (In this time, I had given up and joined my parents jewelry business.)
Turns out a 30-year option lapsed a YEAR after I wrote spec.
They looked at it like found money and gave me a year to attach talent (handshake deal, no rights) because they liked me and my "vision."
In a year-ish, we got Mos Def, John Hawkes and then Jen Aniston.
A year after that we had financing, which is another long boring story with a  happy ending.

What interested you about the story in Life of Crime?

Everything. It was everything I couldn't write for myself. I wrote a spec called THE KING OF PRUSSIA. A thriller that took place in King of Prussia, PA. I had 40 speaking parts, too many locations, and plot that was very complex and I wasn't entirely sure it even made sense if someone was paying close enough attention. But, it was pretty good so I tried to make that and failed. Then I read LOC and it was like, ahhhhh..... here are 7 amazing parts, in 6 locations basically and I just loved it. I loved Mickey, the lead. Louis and Ordell (who were in Jackie Brown...) All the parts were characters I treasured, and I truly felt I could do it better than anyone. I saw it in my mind and got the tone. I wanted to protect it like a mother bird.

What's something you learned from working with stars like Jennifer Aniston and Tim Robbins?

Well, one, that people are that big because they're enormous talents...but I think I learned that actors are always still actors. They want approval, they want a director with a vision and an opinion. They want to play. They both struck me as people who didn't have a major ego that interfered with their work. They were ABOUT the work, and the character and were there to serve the story.

Also, Jen said green tea is very good for you so now I drink it a lot.

Are there any recent films or scripts you find inspiring? What have you loved lately?

Calvary. I'm shocked more people aren't talking about it. I think because I'm so judgmental of films, it's very hard for me to "shut off." But sometimes you sit in a movie and you just know you're in the hands of a fucking pro from the first frame, the first line, and I can let go and enjoy the ride. I felt this way about Calvary and also felt it took on MASSIVE themes in such a clean, unpretentious way. I also felt this way about Planet of the Apes. Those two films knocked me on my ass. I hate being preached at, but I love being asked to think.
Posted by Amanda at 8:58 AM