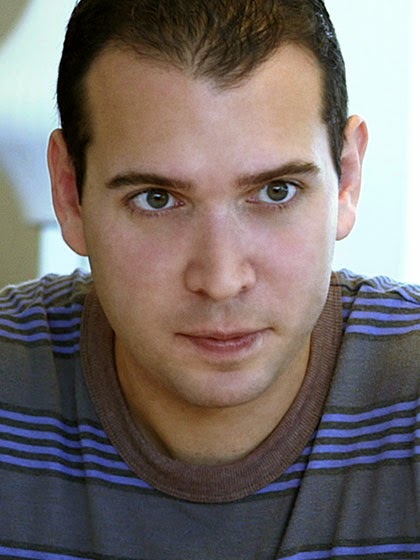 Screenwriter Dan Schoffer has an interesting credit on his resume: he wrote a feature script that's been made into two different movies, NOT COOL and HOLLIDAYSBURG, each directed by two separate directors. Then, the whole experience was filmed for the reality show THE CHAIR, which airs Saturday nights on Starz.

The two movies are currently playing in theaters in NYC and LA through next week. They're also available on iTunes, Amazon Instant Video and other OnDemand platforms.

I talked with Dan about his experience with the THE CHAIR, finding a manager, "write what you know" and how a blind email query (!!!) led to the career he has now.

What's your background? How'd you get started in screenwriting?

I grew up in Margate, NJ and went to college at the University of Pennsylvania, where I double-majored in English and Theatre Arts. While I realize that the practical merits of these two majors are easy to poke fun at, the truth is that my liberal arts education absolutely prepared me for being a screenwriter. Turning in papers on their due dates is pretty much what I'm still doing today.

College was also where I took my first and only class in screenwriting. It was a one semester "Intro to Screenwriting" course, and it was exactly what my 20 year-old self needed. I had always been a film buff throughout my childhood, but I knew nothing of the nuts and bolts of the screenplay form. The internet was a different place in the late 90's/early 00's -- we didn't have access to every script ever written -- all we had was Drew's Script-O-Rama, which was basically just transcripts. And so this intro course was a real eye-opener, introducing me to actual scripts and to the world of sluglines, Final Draft, and Courier 12.

How did you get involved with THE CHAIR?

Like many of the other breaks in my career, this opportunity came through producer Josh Shader. I've been lucky enough to work with Josh for nearly 6 years now, and in many ways, my "first break" was his returning my blind query email in the fall of 2008. Thankfully, Josh saw some potential in my writing (an ENTOURAGE spec, of all things), and we began collaborating on feature ideas from scratch. After a failed crack at a high-concept rom-com, I pitched him my idea for an ensemble movie about college freshmen who return home for Thanksgiving break weekend. I remember Josh (rightfully) saying that the bullseye on an idea like this was miniscule, but I think he sensed my passion for the concept and he encouraged me to stick with it. Characters and ideas started flowing, and I fell in love with the innate timeframe of freshmen returning home on a Wednesday and going back to school on Sunday. This idea ultimately became the screenplay HOW SOON IS NOW, which we sold to MTV in 2011. They ended up not making the movie over at MTV, but were gracious enough to grant us back the rights to shop around. For the next year or so, we came close with independent financing at a few places, but we just couldn't get over the hurdle. This is where Chris Moore comes into the picture...

Josh and Chris had worked together on the AMERICAN PIE franchise, and had begun collaborating on another project when Chris told him about his concept for THE CHAIR. At this point, Chris was still searching for the right screenplay to bring his crazy concept to reality. I've been told that Chris read some 150 scripts by the time Josh slipped him HOW SOON IS NOW. Maybe it was just fatigue on Chris's part, but I feel fortunate that his search stopped there.

What was the notes process like on THE CHAIR?

The notes process was the most insane three months of my life. I was rewriting both Shane's and Anna's movies at the same time last fall. Sometimes working on one script in the morning, and the other in the afternoon. And per Chris Moore's instructions, all the main characters had to keep their original names, meaning I had to keep straight multiple versions of Scott and Tori and Heather etc. It was a logistical nightmare. But it was also the most exhilarating few months of my life.

My biggest frustration was the realization that neither director wanted to film the movie I saw in my head. They viewed my script as the jumping off point to fulfill their creative desires. And while it's for the TV show's benefit that Chris Moore chose two directors who would deliver wildly different movies, for me, it was really hard at first. I loved my original script. I spent 4 years working on countless drafts and I wanted to see that movie made. But after meeting Shane and Anna, it was clear that wasn't going to happen. Film is a director's medium. And once a director comes on board, the screenwriter (even in the case of an original screenplay) is there to serve the director's wishes. If you don't do that, you get fired.

Would you consider directing your own work in the future?

Absolutely. I'm dying to direct to my own work. Although... I did see someone on Twitter suggest that for season two of THE CHAIR I direct one of Shane's or Anna's scripts. I wouldn't be opposed to something insane like that, either.

How did you get your manager?

Once again, through Josh Shader. After pitching Josh the idea for HOW SOON IS NOW in fall 2009, it took a full nine months before we got the script to a place where he was ready to show it to anyone. And that nine month period was tough for me. I was a 25-year-old wannabe screenwriter with no industry connections of my own. Josh was the first person to take a chance on me, yet he made no promise that he would ever show the script to anyone. He wasn't going to tarnish his reputation by sending a shitty script around town. So I had to prove myself with my writing. Ultimately, around June 2010, Josh sent the script to a few managers he respected. We got lots of positive feedback and interest, but the most passionate group by far was over at Magnet Management. I signed with them that summer and am still with them today. I feel so lucky to have landed with managers who believe in my writing and support me so thoroughly. Young writers get obsessed with finding agents, but I firmly believe that a good manager is the most crucial first step in building a career. In my opinion, a great manager is someone who let's you know they're in it for the long haul, and then backs that up by developing you when they know full-well it's going to be a couple years before they get any return on their investment. That's what I found with Magnet.

What's something you've learned or how have you changed since moving to LA in 2007?

I've learned to have patience. Lots and lots of patience. The film industry moves at a snail's pace. It takes forever to get a read. And even longer to get a response. And usually that response is going to be "no." But this is where patience comes in...because it only takes one person to say "yes." As writers, we dream of bidding wars for our original screenplays. But that almost never happens. Instead, it's usually one person taking a chance on your script and saying "yes." But that's hard to find. And to actually get a movie made, you'll need multiple people to say "yes" at multiple stages of development. As I've said, the idea for what became NOT COOL and HOLLIDAYSBURG came way back in 2009. At this time, I'm currently rewriting an original script for Dimension Films that I first started working on back in 2010. These timelines are par for the course. If you're expecting to write a screenplay, sell it overnight, and have it made right away, you're in the wrong profession.

What's the best or worst writing or industry advice you've ever gotten?

I think the worst writing advice is the old "write what you know." While there is certainly some truth to that adage -- mainly that you should trust that what interests you will interest other people -- I don't think "writing what you know" is something you should actively seek out. Because you're going to do it anyway. We can't help but write what we know. It's called "voice," and it seeps through everything we put on the page. A couple years ago, those Aaron Sorkin supercuts came out on YouTube and everyone started complaining that he re-used the same dialogue/patterns/jokes over and over. He was suddenly being derided, when his only crime was being prolific. We don't complain about a Neil Young guitar lick sounding too much like a Neil Young guitar lick, so why should we complain about a writer sounding like himself. Meanwhile, Sorkin won an Oscar for a screenplay about Facebook, after publicly admitting that he had never even been on Facebook. I love that script so much. And it's a perfect example of a writer using their voice to write about something they originally knew nothing about.

As far as industry advice goes, it's probably the advice my dad gave me when I was playing sports as a kid: "keep your head up." Just like you can't let striking out at the plate get in your head for your next at-bat, you can't let yourself get down on your writing because someone else doesn't like it. It's such simple advice, yet it's so hard to apply. And I struggle with it every day. Whenever someone passes on or criticizes my work, I can't help but take it personally. Because it is personal. It's your work being judged.  And it hurts when people don't like it. But you can't let every pass or criticism feel like an indictment of your talent. As I said before, it only takes one person to say "yes."
Posted by Amanda at 9:23 PM