What's the difference between an average script and a great one? 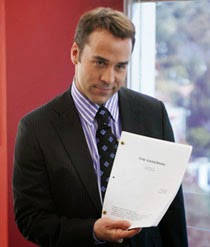 Ed writes: As you’ve read and evaluated scripts, are there common ingredients missing in a script that is good but not good enough to go anywhere? Are there characteristics you notice between a script that’s OK and one that’s oh-my-God-I-have-to-see-this-made!

This is a great question -- and it's difficult to answer. You're onto something with the idea of the "oh-my-God-I-have-to-see-this-made" script. On a practical level, your script needs to be something that will make the reader take action. A script that will make them write "Consider" or "Recommend" in coverage, forward it on to a boss or other person who has the ability to take the script to a buyer, buy the material themselves, or represent the writer. If your script doesn't make a reader do one of these things, then they didn't love it that much.

A reader friend of mine said that after ten years of reading over 10 scripts a week, he only remembers about 15 scripts. I feel similarly; sometimes I'll be asked about a script I read two days ago and I'll have to re-read my coverage because I can't remember anything about the script. Unfortunately, most scripts are forgettable. Fine. Standard. Mediocre. So that's step one: you need to write something memorable.

I know that might sound intangible and unhelpful, but that's because impressive scripts are memorable for all different reasons. A script might have a really unique main character or point of view, laugh-out-loud dialogue or a high-concept, unusual premise. But the common theme in all of these things is originality. Most of the scripts I read feel a lot like all the other scripts I read (or movies I see). Most scripts have nothing new, fresh or different about them. They present characters who are just like every other character, dealing with the same things you've seen a thousand times before. They go through all the plot points you expect, with no real surprises or turns. Nothing that makes you think, "I've never thought of that" or "I've never seen that before." One of the challenges of screenwriting is working within convention and structure without resorting to the cliche, formulaic and expected.

Another difference between OK and great scripts is polish. Great scripts feature action and description that create mood and atmosphere along with dialogue that sticks in your head. Don't miss any opportunity to show off how well you can write. When people read your script, they should feel like they're experiencing a great movie -- but you don't have the advantage of the actual visuals or performances, so your words on the page need to convey everything: emotion, atmosphere, intensity. Is reading your script an experience?

Keep reading professional scripts and you'll see the difference. Also, if you're working to make your current script better, the problem might be in the concept itself. You can polish characters, dialogue, etc., but if people don't find the premise memorable or original, it may be time to move onto another idea.
Posted by Amanda at 10:00 AM

Email ThisBlogThis!Share to TwitterShare to FacebookShare to Pinterest
Labels: Life as a Script Reader, Why Readers Pass, Writing Advice