Aspiring writers often get confused by comedy script format - especially since multi-cam sitcoms are formatted differently from single-cams. Below is a sitcom formatting guide to make things easier.

Note: This post contains snippets of copyrighted material presented as instructive examples in the craft of screenwriting.  If you own the copyright to any of these scripts and want them removed, please contact me.

Single-cam sitcoms (like MODERN FAMILY and PARKS AND RECREATION) are formatted just like feature screenplays. The only difference is that the beginnings and ends of acts are labeled (such as ACT ONE and END OF ACT ONE), centered, underlined and in caps - and new acts start on new pages. For example, here's a page from the 30 ROCK episode "Flu Shot": 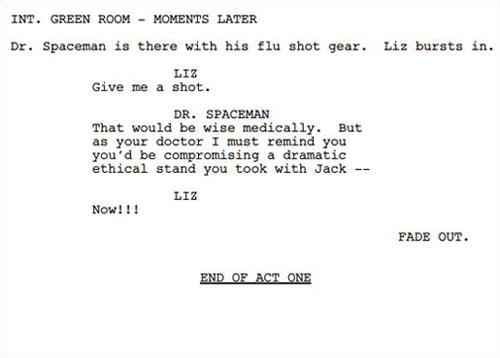 Keep in mind that premium cable comedies sometimes leave out act break labels, since they don't need to accommodate commercials.

Multi-cam sitcoms (which generally have laugh tracks and are filmed in front of live studio audiences, like BIG BANG THEORY and MEN AT WORK) are formatted differently, with double-spaced dialogue, capitalized action/description, capitalized parentheticals (which don't go on their own lines within dialogue), lettered scene labels and lists of who's present at the top of each scene. Take a look at this page from the FRIENDS episode "The One With the Butt": 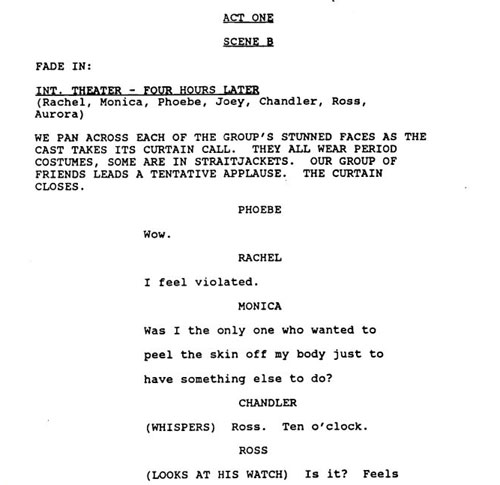 IMPORTANT NOTE: Many of the scripts you find online at the Google TV writing page are shooting/production drafts, not writer's drafts. These can be enormously helpful - but you don't want to copy these exactly. You DON'T need character lists, location lists, scene numbers or (DAY 1) and (DAY 2) in your sluglines. Try to find WRITER'S DRAFTS if you can. The aforementioned 30 ROCK script is a good example of a single-cam writer's draft; this BIG BANG THEORY pilot script is a good example of a multi-cam writer's draft.  (Drama writers: Here's a good MAD MEN writer's draft - but note that MAD MEN doesn't label its act breaks.)

If you're writing a spec of a show, read all the scripts you can find to discover its specific formatting quirks, names of common locations, etc. (Reading a variety of scripts can also be useful in formatting a pilot.) For example, both PARKS AND REC and MODERN FAMILY use mockumentary interviews, but PARKS AND REC calls them TALKING HEADS, while MODERN FAMILY calls them INTERVIEWS.

PARKS & REC (this is a shooting draft): 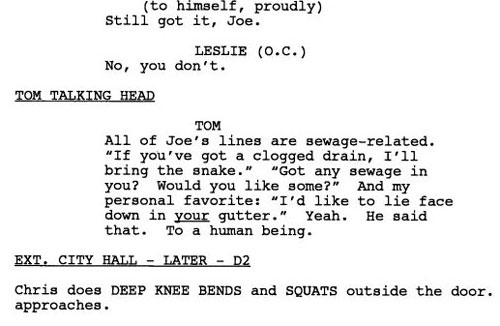 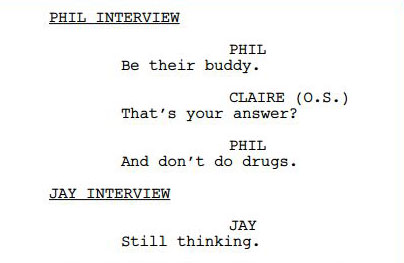 Also pay attention to act structure; you might be surprised to learn that NEW GIRL is in four acts.

The more you read professional scripts, the easier this will get. It's also a good idea to keep a folder of pro scripts on your desktop so that you can search through many scripts quickly when you have a specific formatting dilemma. If the PDFs have been converted from Final Draft files (rather than scanned from paper copies), you can use the search box and search through the text of all the scripts at once. So when I write a montage, for example, I can just search that term and pull up 10 scripts to read how different pros chose to format their montages.
Posted by Amanda at 9:42 PM

In The Office and Parks and Rec they do write the D1 part in the slugline, don't they?
It appears in your example, and also in the Final Draft TV template for The Office.

Again, the Parks & Rec is a shooting script.

It is weird, the Flu Shot script on this page doesn't not match up to the episode at all yet they both are who they claim to be :-/

@Robert the FLU SHOT script here is a writer’s draft. It is not the final shooting draft. The script could have gone through multiple revisions until then.

Thanks for an insightful post! I didn’t know that there was a google TV scripts page. Definitely bookmark worthy. Thank you!

Excellent...absolutely right on time for I was going crazy trying to figure out correct sitcom format. Thank you so much!