I usually look for interviews with screenwriters, but lately I've been noticing that actors have been (inadvertently) offering some great insight for writers in explaining why and how they pick roles. Certainly different stars have different career goals and agendas, but I think the overriding theme - from the following two interviews, at least - is that actors want to be challenged by characters who are both unique and exhaustively fleshed out. 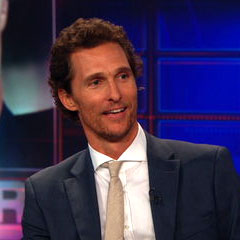 On Tuesday, July 24, Matthew McConaughey appeared on The Daily Show to promote his movie KILLER JOE. Around 18:20 in the interview, he explained his current thought process behind choosing his roles: "The scripts I was getting about two years ago, everything I read, I was like 'Okay, I've done a version of that before,' or, things that I read that were new, I was like, 'you know what, I could do that tomorrow.' And that's not a bad thing, but hang on a second, let's go back, work on the family, make some other things stick, and take the time away until I get something that sort of arrests me a little, scares me a little bit.  And these five independents kinda came back to back to back, and all the roles were very different. They were all characters that really don't pander or placate to anybody's rules but their own. They were very singular-willed characters that I was a little bit scared of - but I was excited to say, 'I'm gonna dive in and come out the other side and figure out who that guy is. And they were all with great directors who have very strong points of view. None of these directors were gonna say, 'Well, let's bring it back to convention, let's play it safer.'"

Jessica Biel also gave some insight about choosing roles at Comic-Con, where she discussed her role in TOTAL RECALL:

"If Len [Wiseman] didn’t care about a female character that was equally smart, cool, tough, kick-ass and emotionally vulnerable, emotionally sensitive and actually a woman, a real person, then you’re dead in the water. Because he, in the end, is the only person who has the ability to put it all together, and on this one particularly, he cared about letting this person be this well-rounded and real -- in a heightened sense, but a real woman." 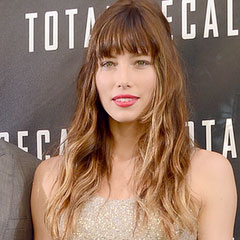 The Hollywood Reporter: How tough is it to find genre or nongenre movies that you feel like offer you a well-rounded character to play? Is it a matter of you simply transforming whatever you take on to make it challenging, or does it need to be on the page from the get-go?


Biel: "No, it’s always a concern because if it’s not on the page, it’s a real question mark. The movie is made on the writing, the movie is made on the set, and the movie is made on the editing table -- you can do whatever you want emotionally onscreen, and then someone can just cut it up and chop it up. So the best possible way to start something feeling confident that you will have a well-rounded experience is for it to just be there, if possible, on the page. Because I’m not interested if something is a surface thing; unless I’m passionate about it for some other reason, I’m not moved by it. And I want to be moved. I feel like I can’t be moved unless I believe that this person really exists and the arc makes sense and where they go is interesting. But if it’s a really well-thought-out person, that’s what is exciting."

The Hollywood Reporter: Is there any difference for you between taking on big movies like Total Recall and smaller ones? Kristen Stewart recently said she learned through the process of making Twilight that you don’t necessarily have to take an independent project to be able to feel passionate or develop something independently. Has that gap narrowed to where it’s no longer like, “There’s my Sundance movie, and there’s my summer movie"?

Biel: "Yeah, I think it has narrowed a bit. It really does depend on who your director is. There are some people who are able to do both really well, and they are some people who just don’t, and sometimes you find yourself in an experience where you feel like you do need to go do your independent Sundance movie. But I do feel like the maybe the gap has closed a little bit. I think that’s also because the audience requires a thought-out situation. It’s not just like, 'Oh, I can just watch a bunch of action and not a real plot and no real character.' It just doesn’t work like that."
Posted by Amanda at 1:36 PM