Happy Valentine's Day or whatever. Today we celebrate by talking to Will Akers, a screenwriter, Vanderbilt professor and author of the book Your Screenplay Sucks. 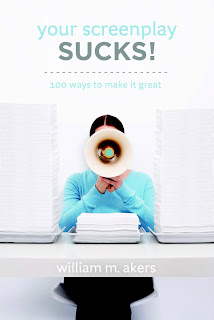 What made you decide to write this book?


Beginners all make the same mistakes. I've been writing scripts for twentyy ears, teaching for fourteen, and critiquing screenplays for at least ten. People pay me a good chunk of money to critique their screenplays and I was beginning to feel either guilty or silly because I was saying the same things to every single person and I wrote the book so I could say, "Here. Do this checklist, then send me your script and we can talk about more interesting things than not having character names that rhyme or start with the same letter. Or your characters talk on the phone all the time, or they spend too much time in the microfilm room of the library, etc." The idea was, a writer could do the checklist, send the rewritten script to me, and we could talk about character, structure, and the more interesting aspectsof writing.

The book evolved as a way to get writers' screenplays past the firs tlayer of defense -- the reader. Readers have an unbelievably difficult job, an untold number of screenplays they have to process, and they are looking for two things at the same time: a great script...or a bad script. If it's a great script, it'll help their career. If it's a bad script, they can quit reading it and go onto the next one. The book gives people tools to keep them from making fatal errors (that beginning writers don'tknow about!) that stop the reader from reading.

What is your background in screenwriting?


I took screenwriting classes at USC. When I got out of grad school, I optioned a book, The Wolves of Willoughby Chase, and adapted it. I gave the script to a friend who gave it to a friend who gave it to a friend who decided to finance the movie, and it got made. Since then, I've never stopped writing. I've had three screenplays made and have written almost countless screenplays that have not gotten made. I've written for television, I've written for studios, I've written for independent producers. I've been paid to write. I've written plenty when I didn't get paid. The interesting thing is, it all feels the same. It feels like writing. You have to enjoy it when you're not getting paid because if you don't, you won't enjoy it when you are getting paid.


What are some common mistakes rookies make?


Buy the book, and find out about all of them! The most common problem is people put the backstory in the first twenty pages. Often with beginning screenwriters, I say, "Just tear out your first twenty pages and write FADE IN on page twenty-one." You'd be amazed at how often that helps. One of my pet peeves is bad physical writing. People turn in a screenplay with incorrect grammar, poor spelling, unclear image order, incoherent sentences, and expect someone to spend between a hundred thousand and a hundred million dollars on what they've made up and put on the page. People use the verb to be way too much. Nothing shouts, "I'm an amateur" like fifteen is's on page one of your script. Beginning writers, because they've written short stories since they were inthe third grade, constantly take you into the character's mind. You cannot do this in a screenplay. You write what the camera can see. You can't have a shot of "Billy remembering the skates his grandfather gave him when he was nine years old" because the camera can only see Billy sitting there like a mope. Another huge problem is separating out the characters' voices. Often, writers' characters all sound like one another. or worse, just like the author. It's imperative that each character sounds only like themselves andno one else, and, in the best of all worlds, someone none of us have ever met. Remember how the girl talked in JUNO? Not like any other character inthe history of motion pictures. Diablo Cody won an Academy Award because she knows how to separate out characters' dialogue.

What would you say are the most important things to keep in mind when writing a screenplay?

Keep the story moving like a rocket sled on rails. Always rememberyour audience. Just because something seems interesting to you doesn't mean it's actually interesting. Run your spellcheck. Have incredibly compelling characters. They can't just be "sympathetic," they have to be fascinating! Tell a story you're dying to tell. Don't write a movie just because you think you're going to make a lot of money. You probably won't, so if you tell a story that means something to you, at the end of the process, you will have learned something. Enjoy writing when you're a failure, because becoming a success won't make you enjoy it any more. The most important thing to keep in mind? You have to have a greatstory. It can't be a good story, it can't be an okay story, it has to be a great story.

People complain about the development process, but I've had pretty good luck with it. I've been fortunate to work with talented people whose goal was making the script better. I've never run into stupid political agendas, where people say that their idea is better than mine just to make themselves feel better about their wretched lives. The most important fact to share about screenwriting is... if you meet some "real," who wants to read your script, be sure you give it to them when it's absolutely, totally, positively, 100% perfect. They're not going to help you, or read it again, unless they think it's fantastic. They have so little time, that if you do find someone willing tor ead your script, give them the finest piece of work you possibly can, so stellar that it's going to make them look good if they give it to someone else. Don't hand someone a screenplay and say, "Thanks heaps for reading it. I've still got a little more work to do on Act Two." Sadly, the only two ways to know if someone actually liked yourscript are if they 1.) want to give you a check, or 2.) pass it off to someone else. Compliments, in Hollywood, or pretty much anywhere else, mean nothing. They can tell you they liked it, but if they don't give it to a director-friend, or a gaffer-friend, or an agent, or someone else in the industry, it means they didn't like it all that much. I get great fan mail about Your Screenplay Sucks!'s usefulness. I wish I could get every single person who's writing a screenplay to read it - not because I need the money, but because it's truly helpful. Check out the website: http://www.yourscreenplaysucks.com/


Thanks to Will for his advice!

Nice post. A lot of good advice - especially about tearing out the first 20 pages of your script.