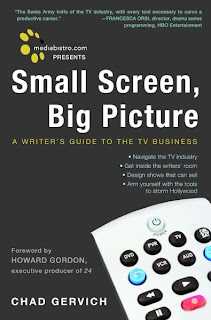 I've been meaning to review the book Small Screen, Big Picture by Chad Gervich for a long time. But you know, I've been really busy writing a feature with structural problems and doing Google searches for "how to make money without having a job."
It's a fantastic book. I have a degree in Television, and I wish I had learned more about this stuff in college. The difference between a studio and a network. What happens during pilot season. What an overall deal is. Why some shows stay on the air and some don't. It's the kind of thing you'll eventually learn by being an assistant in the industry - but this is learning it the easy way, and it gives you a lens into each kind of company, whereas each assistant position is its own little niche.
There are also plenty of modern examples and helpful quotations from successful professionals, from writers to producers to network executives. Though the subtitle is "a writer's guide to the TV business," I think the book is actually a must-read for anyone who wants to work in any aspect of TV. It's comprehensive but also simple and to-the-point.
And for more of Chad's thoughts on all things TV, check out his blog at Script Digest.
Coming soon: An interview with Will Akers, author of Your Screenplay Sucks.

Amanda, congrats on the upcoming interview! "Your Screenplay Sucks" is a fantastic book and should be on every aspiring writer's reading list. As a professional reader, I've seen every example of bad writing that Mr. Akers points out. If more writers read that book, my PASS rate would be a lot lower.

I heard you can sign up for the stimulus bill, but I think you need to be a lobbyist or something.

Thank you for reviewing Small Screen, Big Picture. I picked it up for myself while doing Christmas shopping in December, but haven't gotten very far into it. Your recommendation that it's great (even vital) material motivates me to pick it up again and read it for all it's worth.