Anyway, on to a new blog feature called Things I Love. Today: The Ex List. 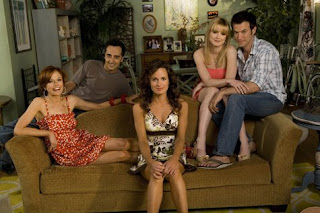 It's probably the new show you've heard the least about, which is sad, because it's great! The premise: A woman visits a psyhic and learns that she has already met the man she is to marry - but she has to find him within a year, or she'll never get married at all. And this woman is the fun and lovable Elizabeth Reaser (you remember her as Karev's faceless lady from Grey's, and I also cried too much at a wonderful little movie she was in called Sweetland). And she has a flower shop. And a dog she shares with her fABulous yet commitment-phobic ex. And a LOT of exes.
It's also hilarious. And sweet. And explores complicated relationships. And is female-driven. It loses a couple points for being an adaptation of an Israeli show (why are the networks SO afraid of original material and obsessed with remakes and adaptations?), and I'm a little afraid I might not love the post-Diane Ruggiero episodes as much (oh how I loved Veronica Mars....sigh) - but for now, it might just be my favorite new show.
Watch it online or Fridays at 9 pm on CBS.
Posted by Amanda at 10:27 PM

I tuned in for the same reason (VM love), but I'm also genuinely loving the show. Being a guy, is that odd? Meh! It's a good show!

I liked it a lot, too. Adam Rothenberg is a friend of mine, so that's why I tuned in, and I thought it was pretty dang good.

I feel sort of bad. I really don't even like the show, but so far, her ex-boyfriends have been played by Eric Balfour and Eric Winter...and if the pattern of hotness continues, I'll be watching this for a long long time.

I am extremely superficial.

Ouch, Fridays at 9? Might as well buy the complete series now.

If the show is a success, what are they going to do for a second season?

I love this show and am so upset that it is being canceled.