Ah yes, the Emmys. I have always felt that Hollywood award shows are a bit annoying in their self-congratulation, but have I thought about what kind of dress I'd like to wear if I were nominated? Or even just allowed in as a seat-filler? Sure.
I am certainly happy for the groundbreaking MAD MEN and ever-hilarious-yet-sincere Tina Fey, and am a bit sad for John Slattery, on whom I have a big inexplicable crush. Otherwise I don't think I have much worthwhile to add - except that I think there is some kind of conspiracy in the lenswear industry. WTF was up with all those thick ugly glasses? 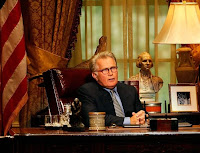 These are just a couple of examples. Very strange indeed.
I was busy this weekend. Good busy, but unfortunately it involved doing very little writing. I did at least have an exploratory conversation about my feature with a writerfriend. I have always talked about the necessity of having trusted friends to read your work and give you notes, but I also really recommend talking about your ideas before you begin. You know, working out the arcs and plots and everything. Especially if you're like me, a person who likes to rush the outlining and just get to the fun stuff, writing scenes and dialogue, this is really important. It's a terrible feeling to have a finished script with basic structure and story problems - and to avoid this, the more thought you give to your planning, the better. Anybody who says they never outline - and who ends up with a good script - has internalized some kind of structure.
I also bonded with a recently single friend who has found herself with more time on the weekends. She told me she was glad she didn't let herself sit around and mope. I said I was glad, too - that'd be like letting the terrorists win.
This morning I went to a small group brunch Q&A with a development exec from a studio. I asked her what she looks for in a script, what makes something stand out from the huge reading pile. She said it is all about character, character, character - especially for the brand of her studio and sister network. And beyond that, she said you'd better grab people in the first ten pages, because even though she's a "nerd" who will read everything, many execs aren't.
On my way out of the brunch I am 90% sure I spotted a minor character from 30 ROCK who wore a serious expression that didn't quite match his navy polo.
And - I had a second celeb sighting at what we call Pretty People Target in WeHo. It was the strangest feeling, watching the lead singer of a band I was absolutely obsessed with all through high school. There he was, the heartthrob from my hometown with the messy blondish hair, marching up and down the aisles, sort of lost but determined. I smiled when I saw the tattoos I had read about in interviews peeking out the sleeves of his green t-shirt. My sister, via text, wanted me to say something to him. I could have, since he walked by me 4 or 5 times before finally finding a jug of windshield wiper fluid. But I didn't want to be that annoying girl. Even putting industry professional etiquette aside, in LA you have to get used to all the celebrities and leave them alone. At the zoo, the animals are in cages, on display, expecting you to stare at them (and keep in mind I kind of hate zoos). But it's not really the same out on the savannah. That's their turf, you know? Put away your camera. For celebrities, LA is the natural habitat - and they're busy buying car shit at the neighborhood Target just like you.

They ignored The Wire AGAIN, thus proving that the Emmy's are irrelevant.

The greatest show television has ever produced, better than Mad Men and Sopranos combined and it's inexplicably passed over five years running.

And Battlestar Galactic is better than Mad Men, let's be honest.

2) i still think you could have mentioned the hometown connection and not have been annoying.