In response to my post about infusing your PREMISE with conflict, Katie wrote: It’s easy to fall into the trap of just dreaming up increasing ludicrous secondary characters and things to do with them, then just writing in how I would react for the protagonist. But this doesn’t yield as much potential for longevity as story/conflict-driven plots do. Anyone encountered an issue like this – finding yourself writing character after character but having no strong plot to tie them together?


And so I give you my latest Microsoft Paint masterpiece, The Relationships of Gossip Girl: 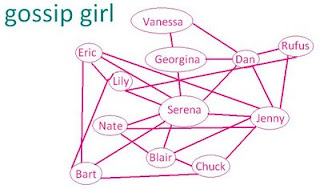 Pretty nuts, huh? There are so many relationships on this show, and everyone is connected to the center protagonist of the pilot, Serena. Whether you're her sister, mother, friend, lover, boyfriend, crush, enemy, what she does affects you, and vice versa. And some of these relationships are inherently in conflict with one another; for example, she's best friends with Blair, but secretly had an affair with Blair's boyfriend Nate. Conflict conflict conflict.
I know you're talking about comedy, but if you have really strong, interweaving relationships, I bet the conflict will come naturally from your characters. What do they want? How do they try to get it? How does it conflict with what others want?

You used the phrase "story/conflict-driven plots." Well, all your stories should certainly have both. But when it comes to driving the story, I think it's best to focus on character. For example:

Your character = Bob, who likes to be the center of attention at all times. Also a nutjob.

So, your conflict = Bob's brother, Steve, is super concerned about what people think of him. He wants to hide or silence Bob for fear of embarassment.

Your plot = We are at a dinner party where Steve is trying to convince his fiancee, Laura, that his family is totally normal.


Maybe Laura is secretly in love with Steve's dad, too.


So maybe this isn't the most enthralling idea I've ever had...but there is conflict, and there is plot, and it all comes from who our characters are and what they want. And when you connecting your characters through relationships just makes this all the more natural. No string-plot needed.

Pretty much nailed this one, Amanda.

All you have to do is connect everyone, strap 'em up with some dynamite, and light the fuse.

If you do it right, the explosions take care of themselves.

i love it when you show off your paint skills.

Check out all the triangles!

The best shows I watch try to give each character a unique relationship with the other characters. One other blogger put it this way: x, y, and z annoy the character for different reasons.