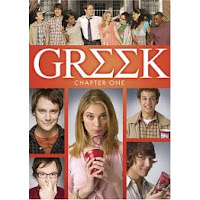 On Friday I picked up Season One of Greek at Target for $19.99 - and it could very well be the best $19.99 I've spent this year. Fricking love that show. After watching the long version of the pilot, I watched it again with commentary from the creator and EPs, Smith, Pillar and Segan. Commentaries aren't specifically designed to give you writerly insight, so they're often just heaps of compliments (our actors are so great! our directors are so great! this location is so great!) and fun facts like "that's my bike!" or "Jacob actually hit Jake in the face with that paddle because he didn't know he wasn't supposed to." But there were a couple of insightful moments in the Greek commentary, about the world Patrick Sean Smith hoped to create, the relationships, and the idea that he was setting up stereotypes and then peeling them away to reveal deep, complex people. Other pilot commentaries I've found to to have insightful moments include the Grey's Anatomy pilot and the OC pilot.

I've finally been making some headway with rewriting my college radio pilot, despite the fact that there was a lot of procrastination in the form of shoe shopping and dish washing and banana bread baking and scrolling up and down and staring at the screen without writing anything for a while. I finally just said I AM GOING TO WRITE THIS SCENE and I did it. Sometimes if a scene is too daunting I move onto one I really want to write, one that's easier because I can already hear the snippets of dialogue going back in forth in my head. And usually once it's out you feel so accomplished (even though you may tear it apart later), the other scene doesn't seem so daunting.
FYI, the banana bread was delicious (anything with half a stick of butter has to be, right?) and though truly Grecian sandals still elude me, I got some white shoes and silver shoes a sweet pair of pink/gold Steve Madden knockoffs for $14.99. Hott. Unfortunately there was no beach-ing as Southern California chose my ONLY VACATION DAYS as its ONLY CLOUDY/RAINY DAYS EVER.
Another realization I had while pilot-ing is that you can really do yourself a disservice by focusing too much on efficiency and not taking enough time to develop your characters and their relationships. I was so focused on plot that I cut a lot of these moments out of my original draft, only to make my writers group hate one character and fail to understand the relationships and motivations of several others. Now I'm going to minimalize my minimalism a little bit and throw it all down on the page, and snip out whatever seems to be too much in the realm of expositional cheating later. I am reminded of one of my favorite scenes in the OC pilot - when Ryan is getting dressed for the fashion show and Sandy comes and helps him tie his tie. It's a touching moment, where we see that Ryan has never really had a father figure (though neither of them come close to saying it), and Sandy sees himself in Ryan. Does it move the plot? Not really. If you cut it out, we could figure out for ourselves how he got from wifebeater to suit...and there is a similar moment when Julie criticizes her daughter Marissa's hair and dress choices. No huge plot advancement - just simple moments that delve into relationships, and really bring us into what the show is about.
Another thing I thought about is that pilots don't necessarily need to include huge plots with all the minor characters. Instead you might be just planting seeds for later in your hypothetical series. Someone's got a secret, like Jimmy Cooper and his money troubles. In Greek, Calvin's gay - but we don't see a confrontation or resolution yet, just the fact that he doesn't want anyone to know. 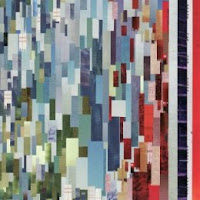 Lastly, I just want to mention how much I love Death Cab For Cutie. I know people have mixed feelings, but I am always so amazed the originality and poignance of Ben Gibbard's lyrics. The song on the new album that I've been listening to the most is "Your New Twin Sized Bed," in which he repeats, "You look so defeated lying there in your new twin-sized bed." A song about watching someone give up on love, manifested in their furniture choices. I just love how Death Cab songs always explore complicated relationships and emotions in unique, detailed ways. It's never I love you or I miss you or I hate you. It's Our-Love-Will-Never-Work-Out-Like-Long-Divison-Without-A-Remainder.
Gets me every time.
Posted by Amanda at 2:22 PM

Email ThisBlogThis!Share to TwitterShare to FacebookShare to Pinterest
Labels: My Own Writing, Writing Advice

Another spec question! Do you think Flight of the Conchords would be a smart, or at least useful, spec?

Someone said, "On TV, the feelings of the characters IS the plot." So it's SET UP and PAYOFF, I guess, with the story beats.

BETH enters the living-room wearing her new cut-away tank top that lets everybody know what they are missing.

Husband, STEVE, is channel-surfing. He looks at her and freezes.

PAY OFF and SET UP:

CUT TO next scene, off of Steve tossing her the remote.


Obviously, Steve is upset, and that's the plot -- what he does with his upset feelings, and how Beth reacts. As a theory of scene construction, it seems to work for TV shows, I think.

Anyway, it REALLY was a great L.A. day yesterday here in Guelph, Ontario, Canada. Sun. Warmth. And no humidity. We get one day per year and I enjoyed it.

If you're interested in writer tidbits on commentaries, I bought the Stargate Atlantis first season box set the other day and specifically because there are quite a few episodes where writers (mostly Martin Gero) do the commentary tracks. Martin's quite chatty and talks a lot about how the episode developed, how the characters developed, etc. The commentary is more interesting than the actual show, I promise :P